ROOM WITH A VIEW - for the rich, not our ex-service men

Our wonderful council, London Borough of Richmond on Thames, have decided that the views from Richmond Hill are too good for our seriously injured servicemen, who have given their active life and limbs in the service to their country. 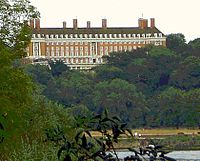 They have given planning permission for its conversion into 90 luxury flats (sorry, apartments) for the rich at £1,000,000 + each. A few years ago they did the same allowing luxury flats on the other side of the river, where the people’s ice rink used to be in Twickenham.

The Star and Garter site was donated to Queen Mary (consort of George V) in support of her plans to establish a home for paralysed and permanently disabled soldiers.


In 1948 residents of the home took part in a forerunner of the Paralympics’ Games, the first national athletic event for disabled athletes, organised by Dr Ludwig Guttmann.
The Star and Garter Home reeived a royal charterin 1979 adding the prefix 'Royal' to it's name.
Our council has no regard for heritage and tradition, by the dedication of a few people, the ‘Twickenham River Terrace Group’ for over 20 years has campaigned, with 10,000 supporters, and prevented the council giving planning permission for the building building of Luxury Flats, a Super Store and underground  cinema on Twickenham embankment.

The Jubilee Gardens on the site of the Twickenham swimming pool, bought with public money in 1925, has stopped this: but for how long?